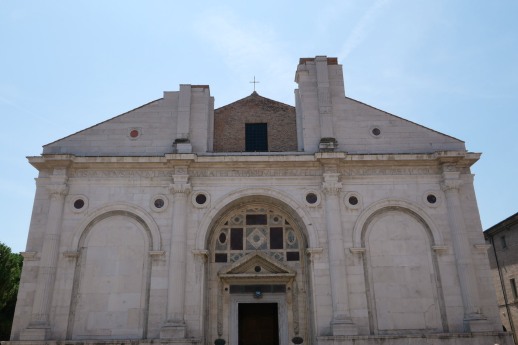 The Tempio Malatestiano is the unfinished cathedral church of Rimini, Italy. Officially named for St. Francis, it takes the popular name from Sigismondo Pandolfo Malatesta, who commissioned its reconstruction by the famous Renaissance theorist and architect Leon Battista Alberti around 1450. San Francesco was originally a thirteenth-century Gothic church belonging to the Franciscans. The original church had a rectangular plan without side chapels, with a single nave ending with three apses. The central one was probably frescoed by Giotto, to whom is also attributed the crucifix now housed in the second right chapel. Malatesta called on Alberti, as his first ecclesiastical architectural work, to transform the building and make it into a kind of personal mausoleum for him and his lover and later his wife, Isotta degli Atti. The execution of the project was handed over to the Veronese Matteo di Andrea de’ Pasti, hired at the Estense court. Of Alberti’s project, the dome that appears in Matteo’s foundation medal of 1450—similar to that of the Pantheon of Rome and intended to be among the largest in Italy—was never built.